Surrounded by mountains in the background of a marine bay, Sami is located on the eastern coast of Kefalonia. In the area there is lush vegetation, running water while have also been recorded 17 locations of caves, which is unique in Greece. Just outside Sami, there is a number of pretty villages with picturesque houses and gardens full of flowers. 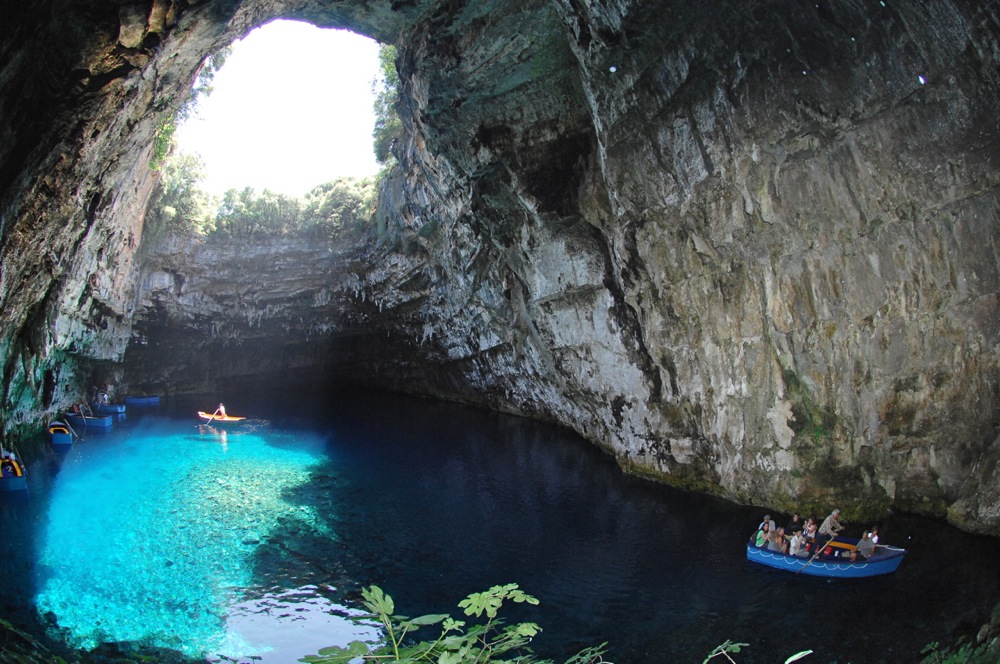 Melissani Lake is in Karavomilos Village. The lagoon is over 150 meters long. Part of its roof has collapsed, admitting sunshine into its interior. This lights up the water and creates wonderful images. In the center of the lake, there is a small island. A narrow waterway between this little island and the walls of the lake – which are covered with stalactites- leads to the rest of the cave. The visitor can tour the lake on a boat.

Drogarati Cave is in Haliotata village and is regarded as one of the finest in Greece. It was discovered 300 years ago and is being formed of stalactites and stalagmites. The cave's depth is 60 meters from the ground level, the temperature is 18 C and the humidity is 90% .The cave is probably connected with other caves in the area. 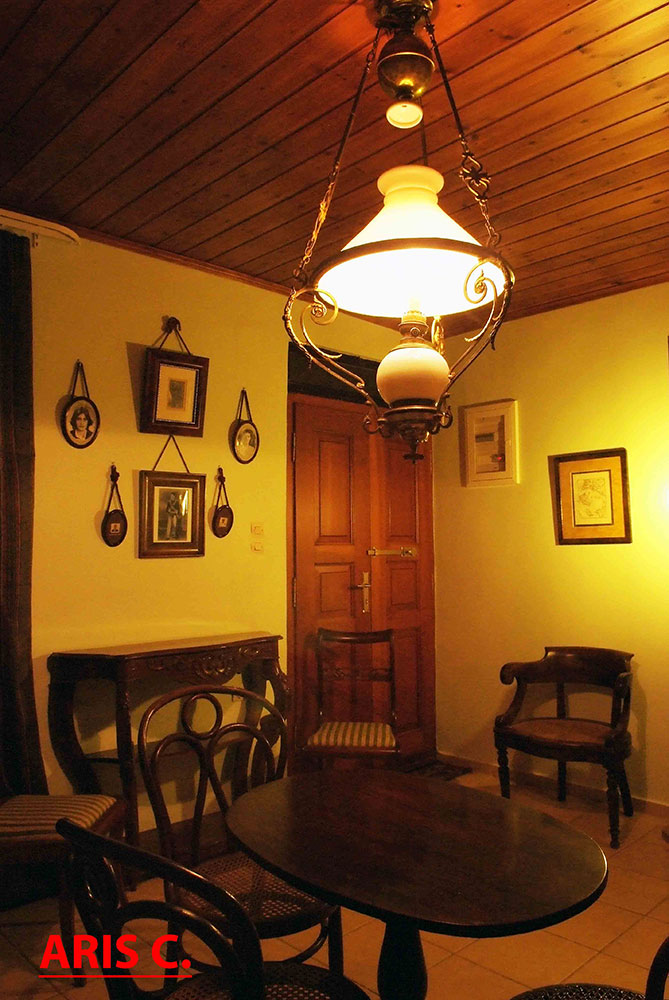 Intercultural Centre of Ionio is a small museum, where the visitor can “travel” back in time and experience how a traditional house of the Ionian Islands (Eptanisa) looked like. The special atmosphere of 18th century till 1953 (year of the catastrophic earthquake) is being revived through old furniture, chinaware, photos, books e.t.c . This small house – museum is situated in the village Karavomilos. 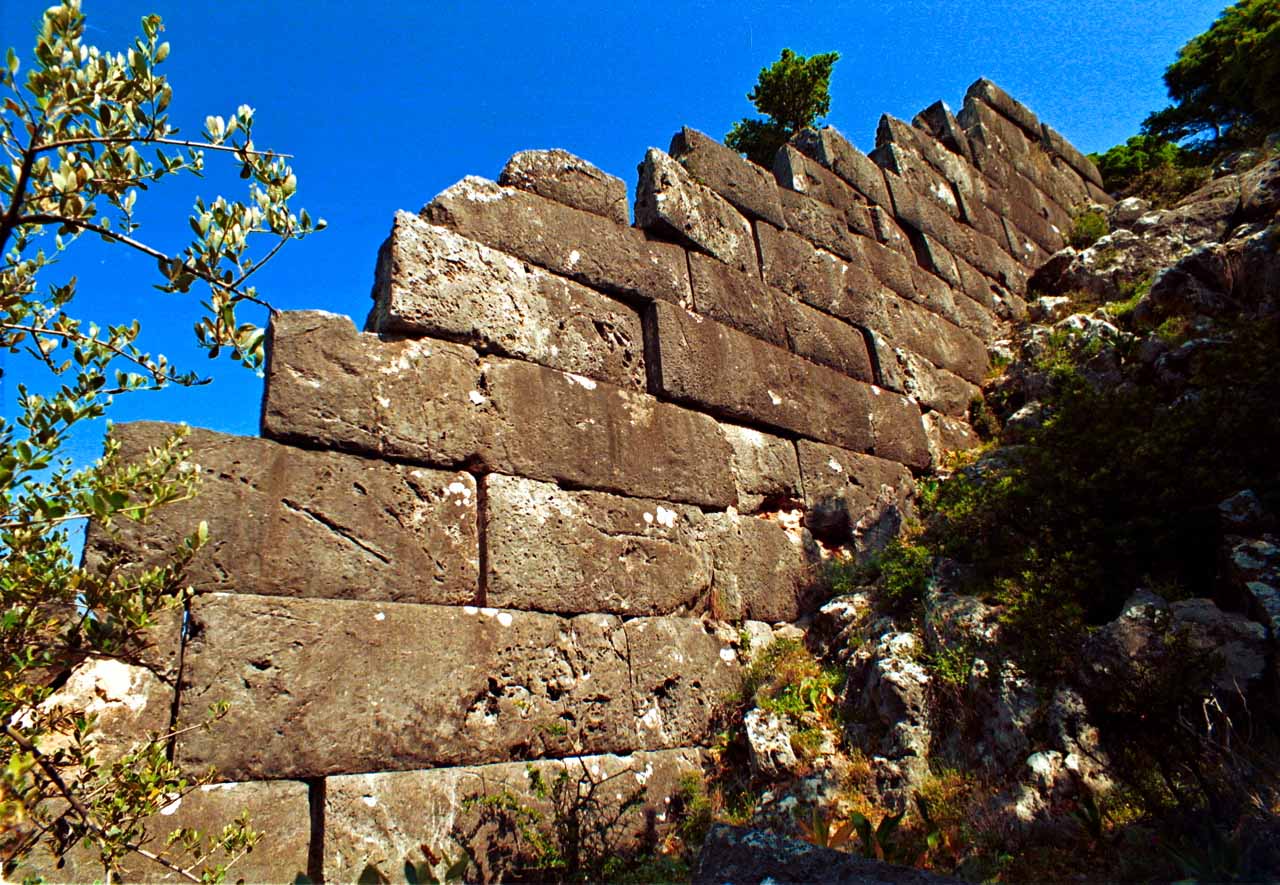 In the 5th century BC Kefalonia was divided in four cities – that of Krani, Sami, Pronni and Palli. On a hill above the Sami, one can admire the ruins of the ancient acropolis of the city - Kyatis. 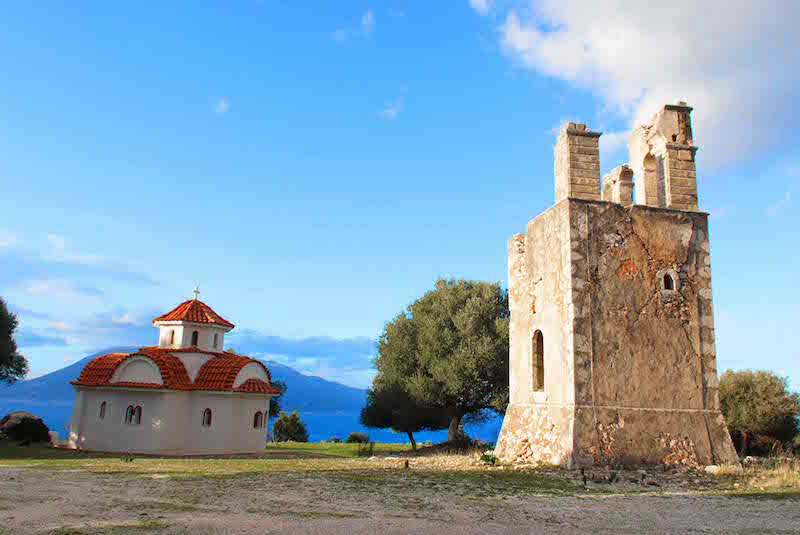 Agrilia Monastery is situated on a hill overlooking the emerald beach of Antisamos and the coastline of Ithaca. The monastery was built in the 18th century, where the icon of the Holy Mary was found and is dedicated to Her. 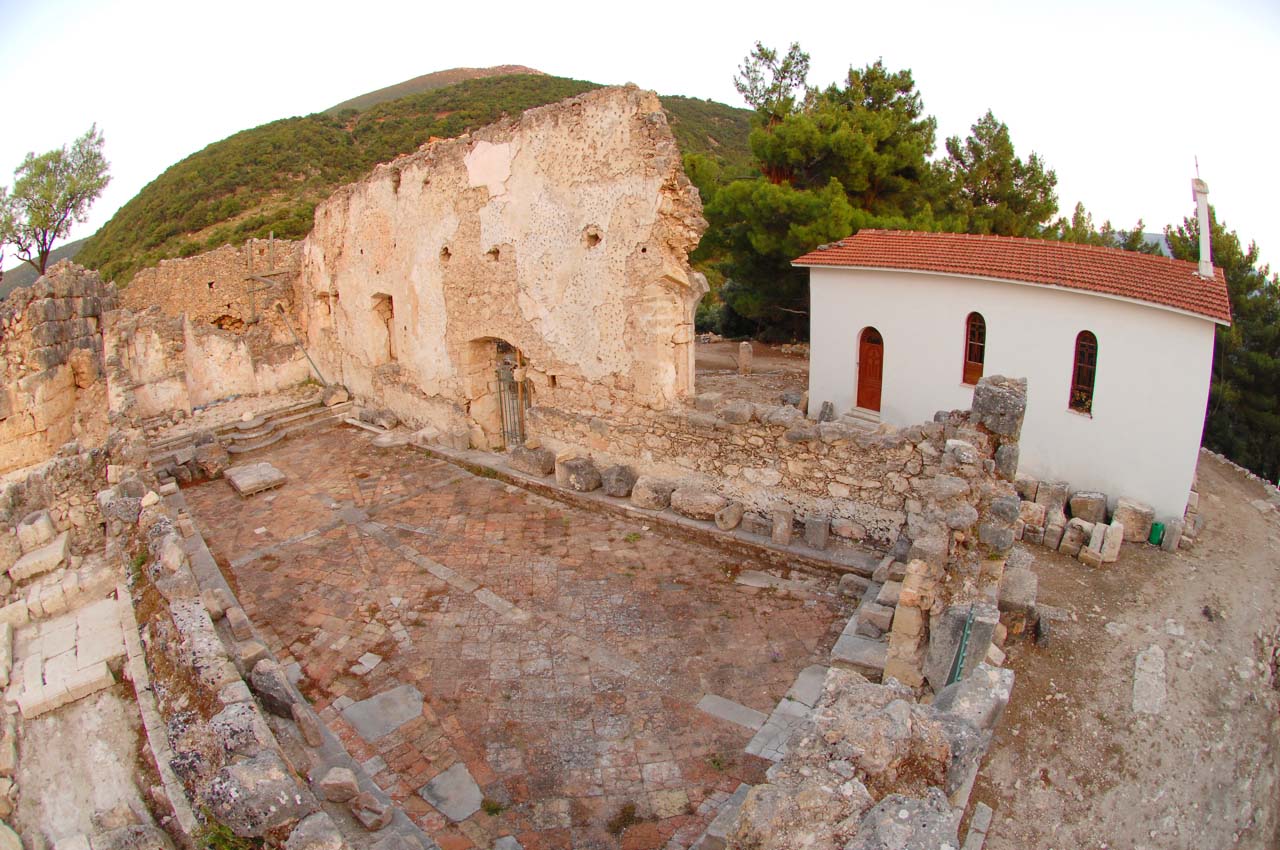 One of the four powerful ancient cities of Kefalonia, was situated on the Agioi Phanentes hill, as is clear from the preserved remains of Cyclopean walls here. On the same site there is also a section of hellenistic fortifications and the ruins of the monastery of the Agioi Phanentes. 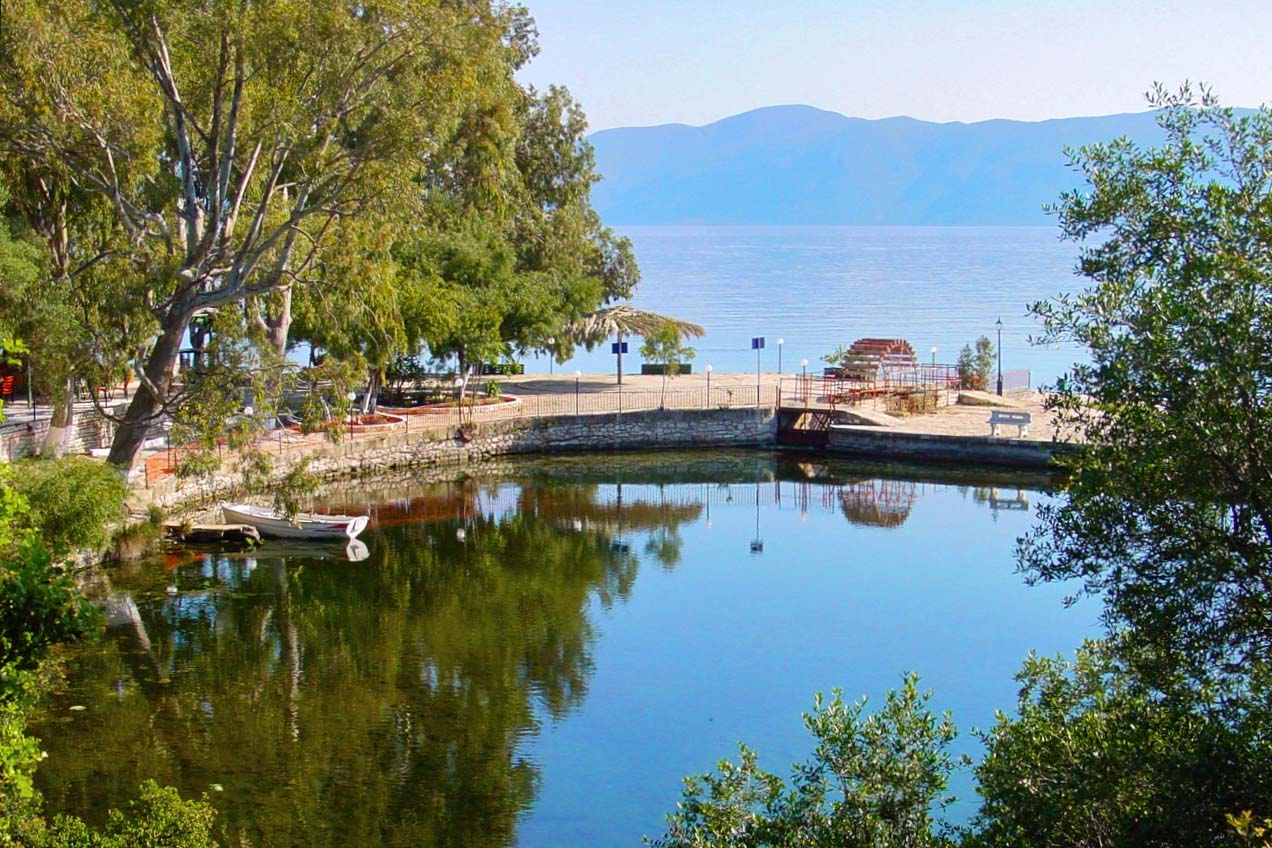 Karavomilos has a small circular lake, with lush vegetation and fresh water which flows into the sea. This is another place where the waters from Katavothres come to the surface. 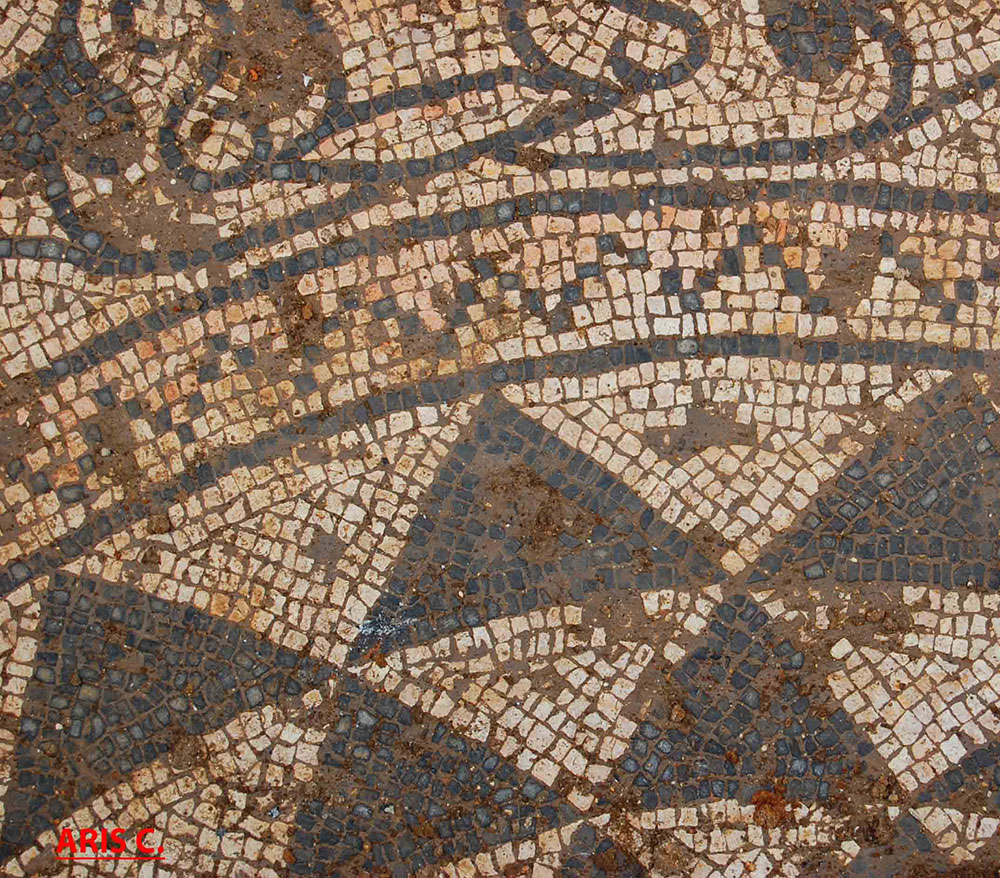 A Roman bath with mosaic floor and a bronze head dating from 300 AD has been excavated in the area of Sami.

The olive museum is located in Pylaros and is hosted by an old mill of the 19th century. The museum hosts tools from traditional mills, millstones, even sun-dried bricks, in which was stored the oil and "initiates" the visitor to the practical production of oil, with the most traditional and pure way. 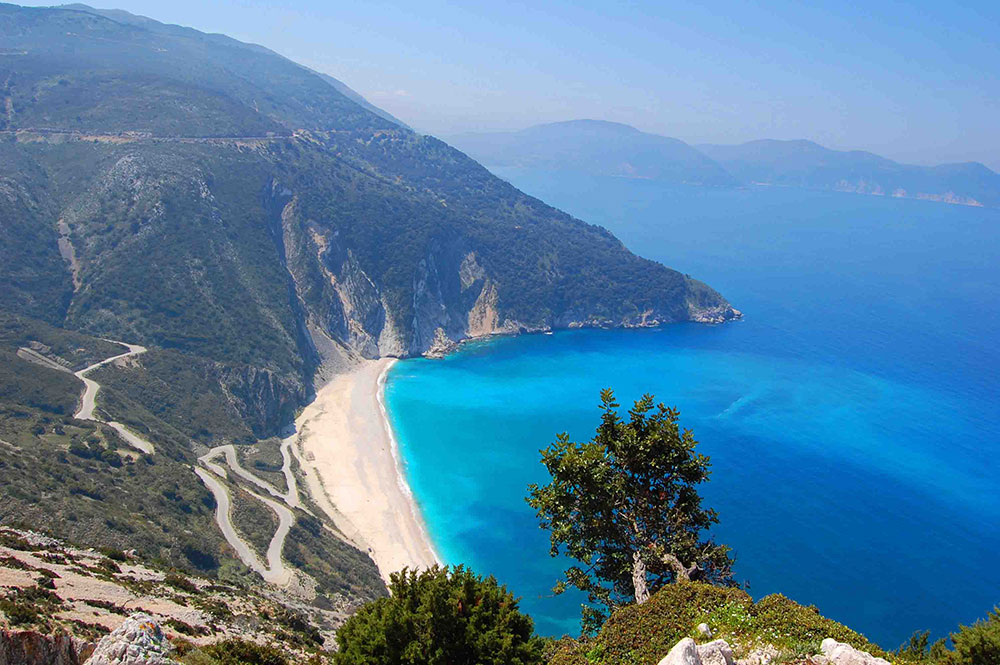 Myrtos Beach is the most famous beach in Kefalonia. It earns a blue flag every year and is among the top ten beaches in Europe. From the road above you have the most stunning view of the beach, known for the contrast of the white pebble and the shades of blue that the currents create in the sea with the dark green of the area. 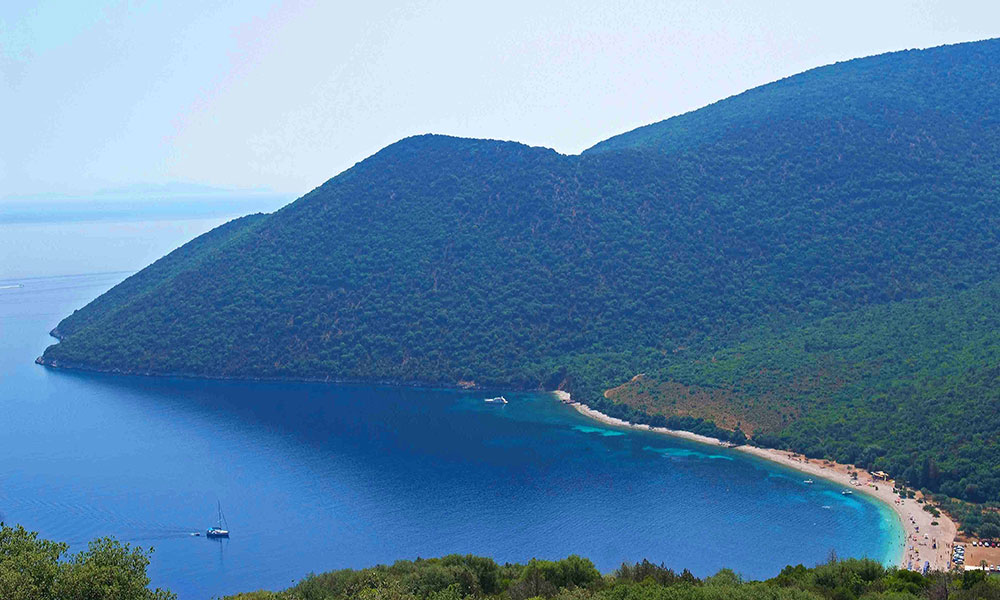 Antisamos beach is without a doubt one of the best beaches in Kefalonia. It distinguishes for the turquoise waters and the white small pebbles and is surrounded by a green hill and vast vegetation reaching the edges of the shore. The beach has gained worldwide reputation from the Hollywood movie "Captain Corelli's Mandolin", where some of the scenes were filmed here.